INVESTING IN COVENTRY – investing where the old meets the new

The second-largest city of the West Midlands, Coventry is also the most central city in all of England. It’s a city with a vast history, and its current condition reflects this past. Now, its town centres’ beautiful architecture manages to draw in the tourists, making it a great city for investments.

Its central location means the city has some excellent transport connections, with London only an hour away on the train, and Birmingham Airport only ten minutes away. Its new train station is only the first stage of a bigger project, which will eventually make the centre of the city more accessible and efficient for pedestrians. In addition to this, there is an easy access to motorways, an intercity bus network, and a proposed light rail system. Therefore, giving Coventry tonnes to offer in terms of transport.

Chosen as the UK City of Culture 2021, Coventry has a rich past. Beginning as a Roman settlement, Coventry transformed into a Saxon nunnery before being destroyed by the Danes. Now, the city is centred around the remains of the cathedral. When the motor industry boomed after WW2, much of the city’s wealth went into funding art and culture, and it’s a legacy Coventry has never abandoned.

In recent years, Coventry has become a bustling city, one which brings in a lot of tourists accounting for its growing economy. Coventry University is also said to be the fastest-growing university in the UK, bringing in more students to the area and also adding to the growing property market. Therefore, this growth is allowing Coventry to become a great place for investor properties.

With affordable houses and high demand for rental homes, 22% of properties are private rented homes. Thus, making Coventry an excellent choice for landlords looking to meet their target yields. 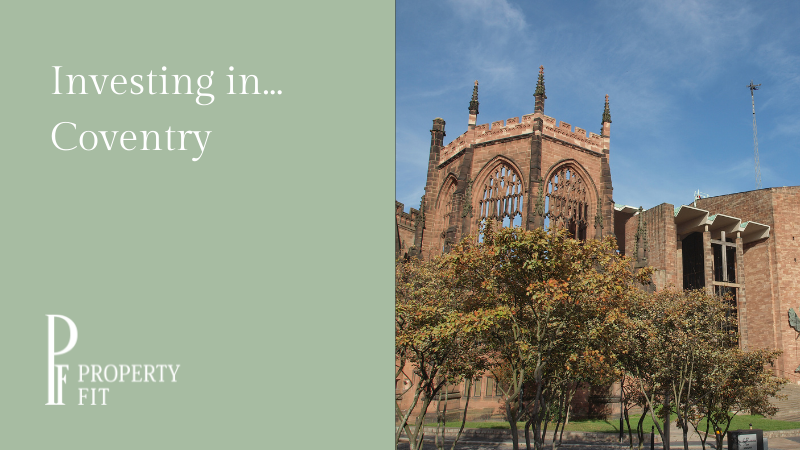